The History of the Waterfall Billboard in Dallas 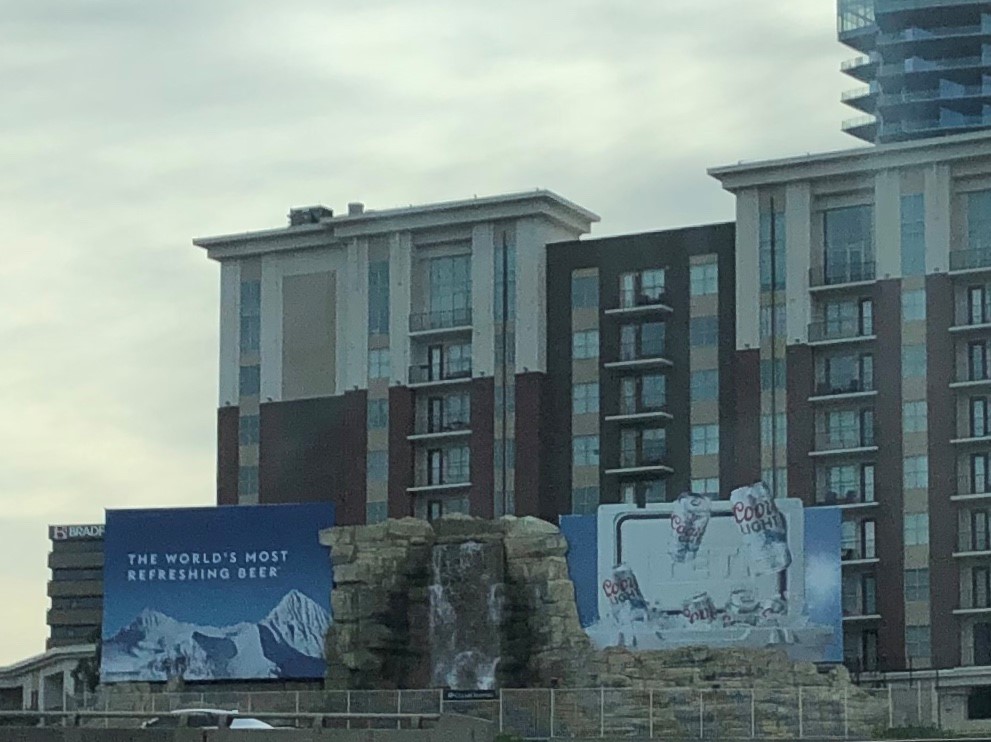 Residents of Dallas who frequent Interstate 35 headed toward downtown more than likely know of the eye-catching “waterfall billboard.” This billboard has cascaded for over 50 years and is a known and loved aspect of the Dallas cityscape.

But did you know that the billboard as it stands now wouldn’t have been possible without the help of Masterplan and its attainment of commercial building permits in Dallas, TX? Here’s some more information about this famous billboard and the role we’re proud to have played in its history.

The waterfall billboard was originally built in 1962 for Pearl Brewing Company on Goat Hill, a small park near I-35 north of Downtown Dallas. It was designed by local advertising firm Tracy-Locke Co. At the time, the sign was the largest for beer in the world.

The billboard stands 45 feet tall and contains a manmade rock waterfall that sends an impressive chute of water cascading into a pool below. Every day, 1.5 million gallons of water course down the waterfall, delighting passerby.

Over the years, the billboard has been leased by a variety of companies, advertising numerous beer and tobacco products. The waterfall was also a popular destination for local students, who were known to dye the water either orange or red to celebrate the victors of the Texas-Oklahoma football games.

Longtime residents of Dallas may recall that the sign shared Goat Hill with Baby Doe’s Matchless Mine Restaurant, which has since closed down and has been replaced by a multifamily housing development. The billboard remains the most-recognized off-premise advertising sign in North Texas.

The uniqueness of the waterfall billboard eventually led to its widespread recognition and fame, with people having long called for the billboard’s protection and special status.

In 2008, Masterplan was hired by the waterfall billboard’s owner, Clear Channel Outdoor. The two firms worked together to gain approval from the Dallas City Council to designate the billboard as an “extraordinarily significant sign.”

At the time, the city had a temporary restriction on building new signs and the construction or improvement of existing signs. The resulting designation and commercial building permits in Dallas, TX allowed the billboard to be renovated and revamped after 40 years.

Through Masterplan’s work, we ensured that the billboard would remain in place for many more years to come and got the necessary approvals to expand and improve the sign despite the moratorium.

Today, the billboard is leased to Coors Brewing Company.

We can help bring your project to life

At Masterplan, we delight in consulting with a wide variety of clients, from individuals and commercial businesses to utilities and government agencies, to help meet any and all land use needs. Without the necessary zoning, permits and approvals, development, renovation and other land use projects can’t get started, which is why we’re here to help.

You can trust us to get the job done. From traffic, impact and land use studies to licensing and commercial building permits in Dallas, TX, we’re a full-service vendor that will help get your project off the ground.