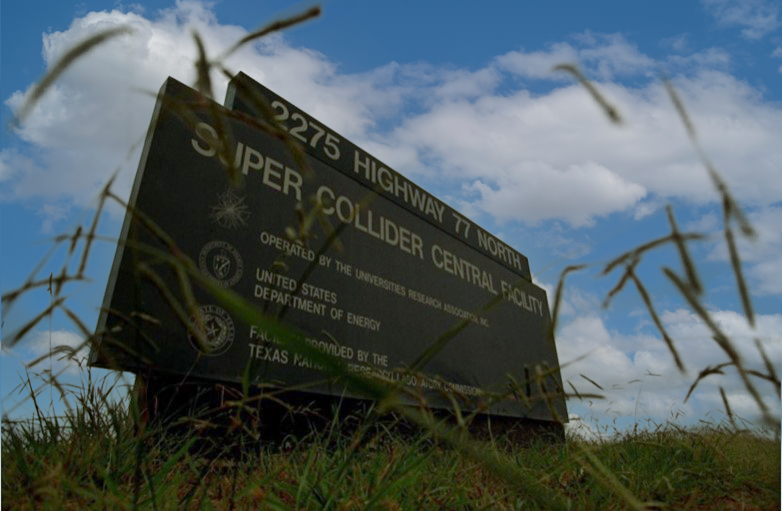 The Superconducting Super Collider (SSC) quickly became the center of attention for a small town in Texas, called Waxahachie. It started as just an idea among scientists in the 1970s to improve the study of particle physics and create energy by smashing atoms. By 1983, the U.S. Department of Energy recommended building the project and assigned a design group to draw up plans.

In 1987, President Ronald Reagan approved the 54-mile super collider that would have been three times larger than the largest collider in existence today. “The Superconducting Super Collider is that doorway to the new world of quantum change,” Reagan said in a speech at the White House at the time. “The United States must maintain the leading edge in science and technology.” It was slated to be the most energetic particle accelerator in the world and would have been 3 times as big as the current super collider in Europe. This billion-dollar project was intended to create approximately 15,000 jobs in this small town in the early ’90s.

“I remember this was a big project for my family,” says Dallas Cothrum, CEO of Masterplan. The young Cothrum recalls his father’s company writing and developing land use ordinances for the City of Waxahachie. “It’s a shame that this didn’t happen. Highly educated physicists and scientists were moving to the area; just think of the economy. Today, DeSoto, Cedar Hill, and Duncanville’s suburbs could have very well been the suburbs of the north.”

At its end, the project was already employing 2,000 people at the site or near Dallas. More than 2 billion dollars had been spent but unfortunately, the SSC did not fulfill its promise.

The SSC was set to change the trajectory of the economy in the southern sector. Poor management and lack of foreign funding are noted for the demise of this project. This was an ambitious science project that remains a mystery of what it could have been and how it almost changed the world.